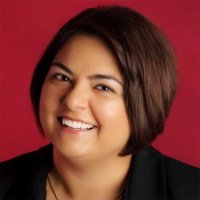 “So in those cases, I think certification could help somebody make that leap or may take that next step to a bigger, more responsibility type of job.”

OMCP: Hi, I’m here with Jackie Urick at Pubcon. She’s the manager of SEO at Sears. Hi Jackie and welcome to the podcast.

Jacqueline Urick: Hi, David. It’s great to be here and thanks for having me.

OMCP: Jackie, tell our audience a little bit about yourself and how you got involved in online marketing.

Jacqueline Urick: Sure. Way back in the 90s, the late 90s, I did web development. This was self-taught. And I fell into a consulting gig with a bunch of ad agencies and marketing agencies around the twin cities in Minnesota. And through that process when I was trying to look for projects I had done in the past or these different campaigns that we were working on, I couldn’t find them in the search engines.

And so I started learning about SEO and then implementing those learnings into my code. And as time went on, it became increasingly clear that my skill at SEO was far more valuable than my crap coding. And so long story short, that’s where we are now. And actually I love doing SEO. It’s so fun.

Jacqueline Urick: Yeah. Mainly it was looking at different websites online like search engines and all of those and reading articles and just trial and error. The one benefit of knowing how to create websites is you can set up a website very quickly and test things out. So there was no formal class that I ever took. In fact, my background was more in science stuff than marketing.

OMCP: Or you get out of them. Let’s put it that way. How important as you as a manager to have the people working with you, your team, to understand that foundational basis at least, the other disciplines other than SEO, content, social media, PPC? Tell me about that.

Jacqueline Urick: So for me as an SEO, I consider my job as being all up and everybody else is business. Because you need to understand the entire ecosystem. It’s not just what’s going on on this page on this one particular template. It’s how the entire site works together, how all of the different marketing works together.

So it’s good to understand the other channels and what they’re doing. And then there’s always information that you may have that they may not see but it impacts them in some way. And so understanding what their KPIs are and all of those things is really critical.

OMCP: What is your opinion or what do you know about online marketing certification today?

Jacqueline Urick: Now the landscape is a little bit different and I would expect someone coming out of college getting an SEO to have some background. They have taken some marketing classes, understand basic web development, those things. But that’s hindsight, right? I would never suggest to someone, “Just try to do it by yourself,” because that’s not a good policy now. The industry has become way more sophisticated than it was in early days.

Jacqueline Urick: And so I think that’s why that certification is actually quite valuable because there is a lot of… Even now, it’s almost 20 years of doing this stuff, even now there isn’t consistency among the way we talk about factors, KPIs, things like that. Every business has its own…

Depending on the person who is in the job before speaks about a certain way and then that’s how that culture starts with the jargon and everything. I think some consistency around that would be huge especially for people to move between different jobs.

OMCP: That’s absolutely true. Each company I think has their own jargon as you say, but also the way to approach things and having a foundational understanding of those I think is important. What can competency-based certification do for our industry does you think?

Jacqueline Urick: I can say, I think it can really help standardize some things. We’re all speaking the same language and when someone is talking of a particular KPI, they were all on the same page with that and having that different kind of, I guess, consistency… Can I just keep saying consistence?

OMCP: Consistence is a good word for that. That’s exactly where certifications need standardized.

Jacqueline Urick: A lot of people say that they know SEO or they know PPC or paid search or re-marketing or whatever, but it’s so varied. And especially when in an enterprise level, it’s completely different scale than maybe a smaller business or the difference between a lead gen and e-commerce. There’s a lot of differences there.

So when someone says they’re an expert, it’s more like, “What did you actually do?” So I need to know that versus… Because I’m sure you were great at whatever that was. So I think one of the other things that certification is useful for is maybe someone is trying to make a leap.

OMCP: Jackie, why did you come to Pubcon?

Jacqueline Urick: This is a great place to learn, to network. There are great speakers here. It’s definitely a great opportunity to meet with people from all over. As far as US conferences go, there’s a lot of international people here, so that’s wonderful.

OMCP: And besides conferences like Pubcon, how else are you and your team training yourselves these days?

Jacqueline Urick: Right. Coming to conferences is a way to connect with other people in the industry doing what you’re doing. I find that’s far more valuable to actually connect with those people than necessarily go a session especially if you’ve been doing it a long time, although my strategy for this Pubcon is I haven’t actually been going to the SEO session all the other things.

I’ve been going to all of the other things that I don’t know as much about and then I get some value out to that. Because it is important for me to know about what’s new in other channels.

OMCP: Right. And again, that’s a base to having that fundamental basis of the other things.

OMCP: Thank you for your time today. It’s been a pleasure and we look forward to talking with you again.

Jacqueline Urick: Yeah. Thank you so much.